I like to have a pot of soup around.  It can be simmering on the stove or left over in the fridge or even packed away in the freezer–I just like to know it’s there.  I eat a lot of soup.  It’s a quick lunch, an easy dinner, and you can always double the recipe to feed even more of the people you love.  (But let’s be clear: I almost always double the recipe whether company’s coming or not.  See above.)

I make lentil and bean soups often but, strangely, I don’t think I had ever made split pea soup before this week.  You know why? Because the recipes always call for an “optional” ham hock.  Whatever that is.  And I can never believe that recipes calling for “optional” meat are going to be any good if you leave the meat out.   I automatically skip over any recipe that calls for bacon and then implies that the vegetarian version will be just as good if you simply omit the bacon.  The bacon is the FLAVOR in that recipe, and a good vegetarian recipe builds flavors in a different way, through spices and cooking technique.

But when I made that Smoky Cauliflower Frittata recently and J said it tasted meaty, I had the obviously-delayed epiphany that the flavors that bacon and ham hocks add are smoke and salt.  I was ready to make split pea soup.  I went right to the source for my recipe: Pea Soup Andersen’s Facebook page.  This recipe is vegetarian in the original, but just to be on the safe side–in case those ham hock recipes are on to something–I replaced the cayenne with hot smoked paprika anyway. 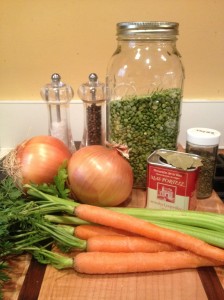 This just the kind of recipe I like: simple, flavorful, hearty. I doubled the recipe, of course, but I supposed you don’t HAVE to.  (A double recipe made a truly huge pot of soup.  The original recipe says it makes 8 bowls, which is a regular-big pot of soup.)

To make a regular-big (not truly huge) pot of Vegetarian Split Pea Soup, dice a large onion, a large carrot and a celery stalk and saute in olive oil until the vegetables soften and the onion is translucent.  Add 1/4 tsp. dried thyme and 1/2 tsp. smoked paprika and stir, then add 2 c. sorted and rinsed green split peas, 8 c. water, a bay leaf and 1 1/2 tsp. salt.  Maintain a peppy boil for 20 mins, then reduce heat and simmer until the split peas are very soft, probably about an hour in all, stirring occasionally.  Season with salt and pepper.  I originally planned to puree the soup, but once I cooked the peas down to mush I loved that texture too.   It tastes great both ways, but I think the pureed version looks a little more elegant.

If you want to get fancy, you could top the soup with another sprinkle of smoked paprika or some homemade croutons.  Or serve it with a nice easy bread or homemade rye crackers.  Or just keep it in the fridge to reheat (thinned with a little water) for lunch this week.