It’s time for another hearty vegetable salad, although if you want this one last long enough to have for lunch the next day you had better at least double the recipe. It’s that good, and beautiful to boot.

Raw kale salads are run-of-the-mill these days, but this salad hails from an era when even people like us were a little skeptical about eating raw kale. It is a “massaged” kale salad that appears to have been all over the internet in 2009 with earnest promises that massaging the kale with salt would break down the cell wells and render it so tender as to be virtually cooked.

Somehow, however, this precise salad didn’t come to my attention until today, when my friend sang its praises and urgently requested the recipe from his sister via text message. Thank goodness. And now I’m sharing it with you in case it also escaped your notice in 2009.

As far as I can tell, this recipe is originally from Feeding the Whole Family by Cynthia Lair, and she got it from a colleague of hers at Bastyr University. If you want a demo of the technique, you can watch her video here, but it’s pretty basic: add salt to kale ribbons and gently knead and squeeze it in for a couple minutes, then add a ton of other delicious stuff, too. 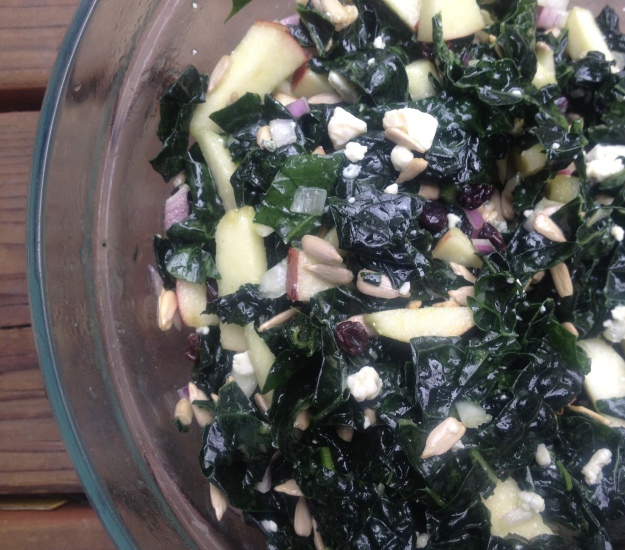 Kale Salad with Apples, Currants, and Gorgonzola: Slice a large bunch of de-stemmed kale (any kind) into ribbons and massage with 1 tsp. salt for 2 minutes. If the kale releases any significant amount of liquid, drain it off before continuing. Toss kale with 2 Tbsp. apple cider vinegar and 2-4 Tbsp. olive oil, then toss again with a diced sweet apple, a couple handfuls each of dried currants and toasted sunflower seeds, about ¼ c. finely diced red onion, and a few good crumbles of Gorgonzola cheese.  Variations recommended by Ms. Lair: raisins or golden raisins in place of currants, pear instead of apple, and varying the blue cheese.

22 thoughts on “Kale Salad with Apples, Currants, and Gorgonzola”

Leave a Reply to Time To Be Inspired Cancel reply