I got The Best Present Ever for Mothers Day this year.  And that is saying a lot, because I was just showered with gifts this year.  The girls’ handmade gifts and cards were almost as sweet as the big proud smiles on their faces when they gave them to me, of course, but J took the cake with one of his gifts.

He organized my spice collection.

Hopefully you feel the full effect of that sentence as I do: you should be bathed in light and joy as the heavens part and you hear the angels sing Alleluia.  Are you with me?

This is a big deal.  Once upon a time, I had a few rows of spice jars tidily tucked into a spice rack.  Later, the jars began to multiply and J put up shelves to hold more of them.  But in recent years the spices had completely outgrown that expanded solution and they began to pile up in tiny bags, then handfuls of tiny bags stuffed into bigger bags, then finally gallon jars full of big and little bags that all were starting to smell like curry powder or cardamom.  It was not a particularly efficient system.

So it was with adoration that I approached my spice rack (it’s really more of a spice wall now) today when I decided to make this dish.  Everything was in its place, alphabetically arranged–except for my assortment of chiles, which take up a shelf of their own.  Bay, cardamom, cinnamon.  Check, check, check.  Cloves, coriander, cumin, right on down the line.  It’s so easy when things are where they are supposed to be!

But, ok, let me get to the part you’re here for.  This is the best Indian food that has ever come out of my kitchen.  Ever.  The recipe is adapted from Kolpona Cuisine, along with a plea to use the whole spices called for despite the mild inconvenience of having to fish them out later.  I don’t know if that is the whole secret here, but the dish was amazing and J marveled aloud, a few times, that it was the best Saag Paneer he’d ever eaten.  (This version was kale paneer, to be precise, inspired by CoolCookStyle, but you can click right here for the original recipe using frozen spinach.) 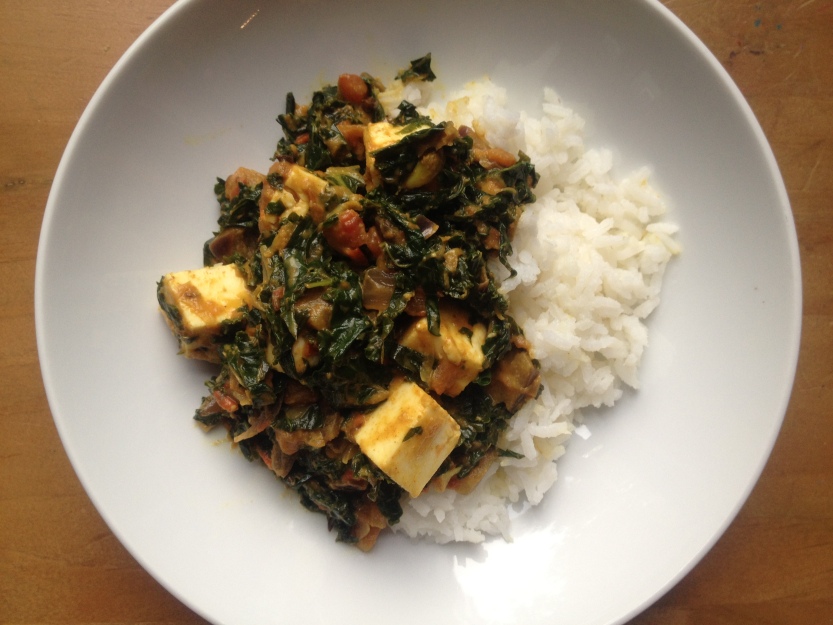 Indian-Spiced Kale and Paneer: Heat 3 Tbs. oil in a heavy-bottomed pot over medium-high heat and stir in 2 bay leaves, 5 cardamom pods, 3 dried red chiles, a cinnamon stick, 4 cloves, and 1/2 tsp. whole cumin seeds.  When spices are fragrant and cumin seeds begin to pop, stir in a finely diced onion and a tsp. salt and saute until onion is tender and browned.  Now add a Tbsp. each grated ginger and garlic, a tsp. each ground cumin and ground coriander, and 1/2 tsp. each ground turmeric and ground red chile powder.  Stir-fry for a minute or two, then add two diced roma tomatoes and let them cook down before adding a washed and chopped bunch of kale.  Let the kale wilt and simmer, stirring occasionally.  If the liquid in the pot evaporates before the kale is completely tender, add a few more Tbsp. water as needed.  When the kale is tender, stir in a block of cubed paneer and a few spoonfuls of cream.  Simmer for another moment or two, then serve over basmati rice.  (Want to make your own paneer?  Check out Paneer 101 from Kolpona Cuisine.)

27 thoughts on “Indian-Spiced Kale and Paneer, or, Not Quite Saag Paneer”