We haven’t made a pizza on this blog in a dog’s age.  Too hot to turn on the oven, you say?  Not in Seattle.  It’s 63 degrees outside at the moment.  Once it gets up to 70 I’ll try to work up my nerve to start making pizzas on the grill instead–any tips for me in advance?

But first, this.  A mushroom and olive pizza has a special place in my heart.  Growing up, my dad (and sometimes my mom as well, but mostly my dad on nights when my mom was elsewhere) would take us kids out to a local pizza parlor.  Red pleather, arcade games, a window where you could watch the guys toss dough and pile on toppings.  We always got a mushroom and olive pizza and a pitcher of ice-cold root beer.  It was, in the parlance of the day, so awesome.

This isn’t your ’80s pizza-parlor mushroom and olive pizza–not because that pizza wasn’t righteous, but because I am a creature of habit and make my homemade pizza with a thin crust.  And because I buy kalamata olives in bulk instead of canned black olives.  And because I usually saute my mushrooms before adding them to pizza.  But you could totally serve this pizza with an ice-cold root beer.  That would still be rad. 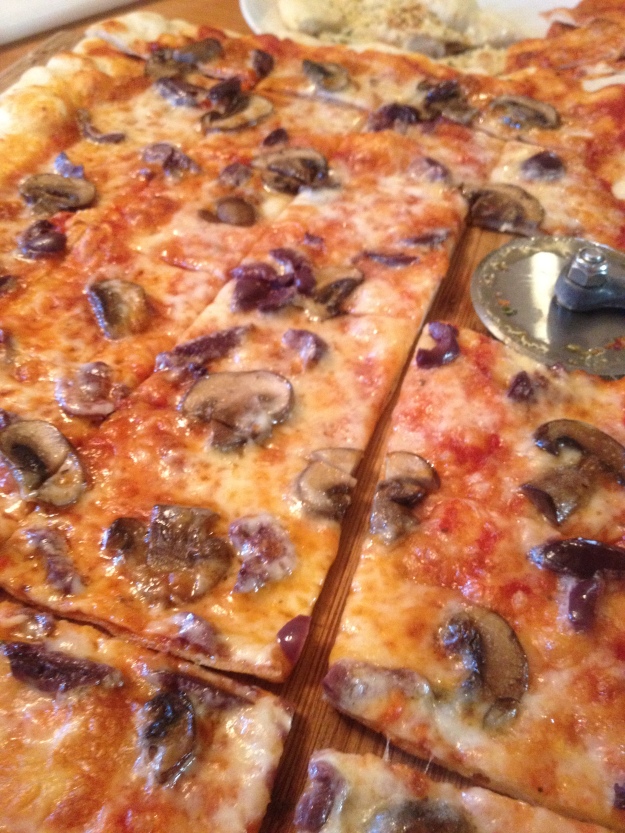 Mushroom and Olive Pizza: Preheat oven (and pizza stone, if you have one) to the hottest setting.  Stretch out a pizza crust until it’s nice and thin and place on parchment paper.  Top with tomato sauce, mozzarella cheese, sauteed mushrooms, and torn kalamata olives.  Bake until crust is crisp, about 5 minutes at 550 in my oven.

22 thoughts on “Mushroom and Olive Pizza”