This is a soup with a story.  It’s essentially a minestrone, so you might think that our tale is going to start in Italy, with a grandmother tending a simmering pot for hours—and you’d be partly right.  Except that this story is about my good friend’s great-grandparents, and the pot was simmering on a stove in a bar in Sacramento, California.

Now, Sacramento has a long history as a drinking town.  So from the first days of the California Gold Rush, to the speakeasies of prohibition, to—I can only imagine—the indulgences of today’s state government bigwigs, there has been a steady stream of drinking establishment clients in need of a little something to help them sober up.

Our story, this soup’s story, takes place in the respectable post-prohibition era.  So it’s the 1930’s, maybe, and later the 1940’s.  The bar is remembered in family lore only as “The Joint,” which may or may not have been its name.  It resided within what was, at the time, the oldest standing building in Sacramento.  A watering trough waited outside the door for customers arriving by horse and buggy.  And my friend’s great-grandparents, the proprietors, always kept a pot of this minestrone soup behind the bar. 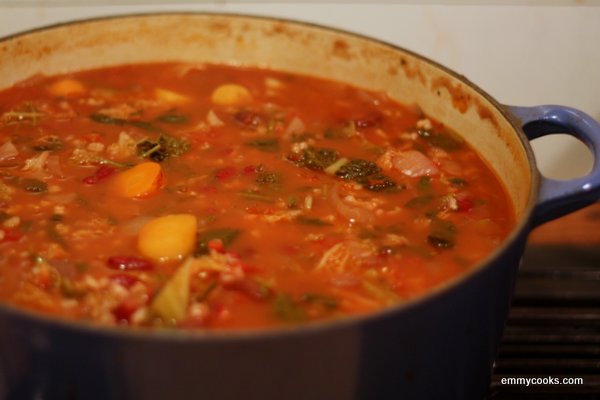 The recipe, needless to say, has been passed down through the generations.

I can’t attest to the soup’s sobering effects, mainly because on the now-rare occasions when I’m in need of sobering up I rarely have the good sense to eat a healthy bowl of homemade soup.  But I can promise you that it’s hearty and warming and just the ticket even when you start out sober.  And it’s the easiest way I know to make dinner for 16 in one pot.  If you don’t have an enormous pot, you may want to scale down the recipe.

A Great Big Pot of Great-Grandma’s Minestrone: In your biggest soup pot, saute 2 chopped onions in olive oil (the original recipe calls for 1/2 c.; I use 2-3 Tbsp.) with a few chopped cloves of garlic.  Add 3 c. chopped carrots, 4 chopped celery stalks, 4 c. shredded cabbage, 4 c. chopped spinach, and 2 Tbsp. each chopped fresh parsley and sage (or substitute 2 tsp. dried of either or both).  Saute the vegetables until they begin to soften.  Add 2 large cans of tomatoes, 1 c. rice, 1 c. sorted and rinsed kidney beans (or 1 can), and 4 quarts soup broth.  Season to taste with salt and pepper.  Bring to a boil, then lower heat and simmer for about an hour and a half, until the beans are tender and creamy.  Serve topped with grated Parmesan.

Note: Yes, of course you can substitute arugula for the spinach and kale for the cabbage.  And add winter squash.  And use brown rice or wheat berries or whatever beans you have handy.  Of course.

14 thoughts on “Minestrone, or, My Biggest Pot of Soup”