In a different life, I used to live in LA.  I mean, it was this life, but it was a long time ago.  After more than a decade, those LA years have receded into a happy, ephemeral recollection of palm trees, of 72-and-sunny, of riding my bike to the beach and farmers market.  (I think I was supposed to be have been studying.)  They were lovely years.

Now I live in evergreens, in 50s-and-drizzling, in walking at a snail’s pace with three beautiful children who cannot be hurried as they collect sticks and rocks.  These are lovely years as well.

Not much endures in my life from that time in LA, except for the most important thing: a few good friendships.  I had the good fortune of spending last weekend with some of those old friends.  It was so nice to see them, to catch up, to laugh really hard and spend the day together.  And, just as nice, to cook together.

We made tacos, of course.  You can take the girl out of California, but you can’t take California out of the girl…is that how it goes?  What a silly saying.  These tacos make no claim to authenticity of any kind, anyway.  They come from the opposite of California, the New York Times (specifically the Recipes for Health series).  They’re good.  Serve them alone or as part of a taco spread (with fish tacos, maybe, or tempeh or black bean tacos, or even breakfast tacos).  A side of seasoned black beans wouldn’t be amiss, either. 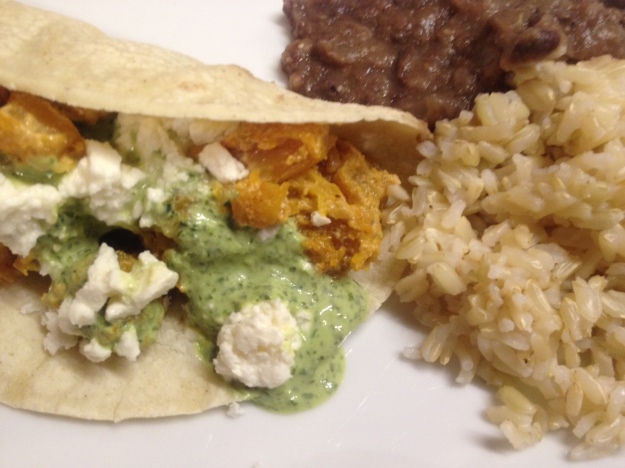 Butternut Squash Tacos with Chipotle and Feta: Chop about 2 lbs. butternut squash into 1/2″ dice and saute in your widest pan over medium-high heat until tender and browned in spots (don’t stir too often at first to promote browning; once the first layer of squash is golden brown, begin to stir more often).  You can add a splash of water and scrape the pan well if the squash starts to stick.  When the squash is cooked, season with salt and stir in minced or pureed chipotle peppers in adobo to taste.  Remove from heat, stir for one minute to cool a bit, then stir in 1/2 c. plain yogurt.  Serve in warm corn tortillas topped with feta cheese (and I couldn’t resist adding some of my new favorite cilantro-yogurt sauce as well).

21 thoughts on “Butternut Squash Tacos with Chipotle and Feta”