I am not a morning person.

On weekdays I often scramble downstairs just as J is walking out the door.  He and the girls have been up and dressed for an hour, breakfast is over, art projects are often underway.  I burst onto the scene and immediately start searching for three tiny pairs of shoes and three even tinier pairs of socks so I can herd the kids straight out the door to get my oldest to kindergarten.  Which starts at almost 9.  This should not be a hardship.  (In my defense, my baby has been waking up all night long lately, and so have I.  But, honestly, I’d be sleeping until the last possible second no matter what.)

I am pleased to see to my family’s sweet faces in the morning, of course, but you know what else I’m always happy to see?  COFFEE.  J, inexplicably, does not drink coffee.  Which is either virtuous or insane.  But he does make it for me, a perfect French press pot of dark roast beans, ready to plunge the moment I get downstairs.  It is an act of love.

So maybe now you’re thinking that this should be a coffee recipe, but I only have one and it only involves glossy, dark-roasted coffee beans and hot water, plus maybe a pinch of cinnamon or cardamom in the grounds–try that!  Instead, my point here is that sometime it is rather late in the day before I get around to breakfast. 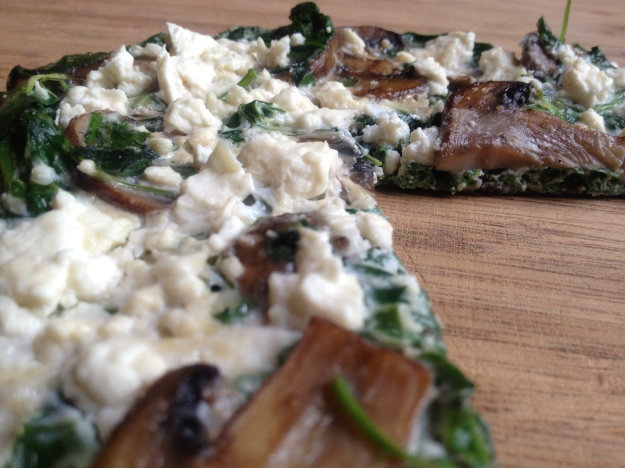 A single-serving frittata is a great way to get your vegetables in at breakfast.  You can also make a big batch in muffin tins to grab on your way out the door all week, have you tried that?  I am usually not that organized, so today I made mine in my 8″ cast iron skillet.  You can use any small ovenproof skillet, or even one that’s not ovenproof, since a frittata this small is easy to flip and finish on the stovetop.

The key here, as far as I’m concerned, is to load up on the vegetables, using the egg to just hold it all together.  And since I actually used egg whites this time instead of whole eggs (the yolks went into the crust for mini Strawberry-Rhubarb cornmeal tarts), I made sure that all my ingredients were extra-flavorful and well-seasoned.  Egg whites are a great source of protein, but flavor?  Not so much.  Enter savory mushrooms, peppery arugula, and salty feta–now we’re talking.

Single-Serving Frittata with Mushrooms, Arugula, and Feta:  Saute a big handful of sliced mushrooms with a pinch of salt in a small pan over high heat until tender and golden.  Add a double-big handful of just-washed and roughly chopped arugula and stir into mushrooms until wilted.  Remove from heat and season vegetables to taste with salt and pepper.  In a medium bowl, whisk an egg or two (I used two egg whites) with a Tbsp. water and season with salt and pepper.  Stir in the vegetables.  Return your same pan to the stove over medium heat and add another little bit of oil, then pour in the egg mixture, spreading the vegetables out if necessary.  Cook about five minutes then either (a) sprinkle feta on top and transfer to a 375 oven for a few more minutes or (b) flip the frittata, sprinkle feta on top, and cover for a minute to melt the cheese a little while the eggs finish cooking.

17 thoughts on “Single-Serving Frittata with Mushrooms, Arugula, and Feta”