Is it wrong to tell you, right off the bat, that these enchiladas–any enchiladas, really–are just an excuse to eat that sauce we made yesterday?  We loaded them up with good toppings, too–avocado, sour cream, a fried egg…what?  You don’t top your enchiladas with a fried egg?  It’s high time, I tell you.

This dish has all the flavor of good Mexican food without the fussiness of individually-rolled enchiladas.  I used the vegetables I had on hand; you should do the same.  Except for the potatoes.  Do use potatoes.  I love potatoes with Mexican flavors.

Once you make the sauce you’re most of the way there.  Or use a jarred sauce (I like both the Hatch and Trader Joe’s brands), in which case the enchiladas are almost made already right now.  Dunk tortillas in the sauce, layer them with well-seasoned cooked veggies and a few handfuls of cheese, and hey presto, you’re done.  Fry your eggs just as you take the enchiladas from the oven.  There’s no photo of that part because it looked too good.  We just had to dig in. 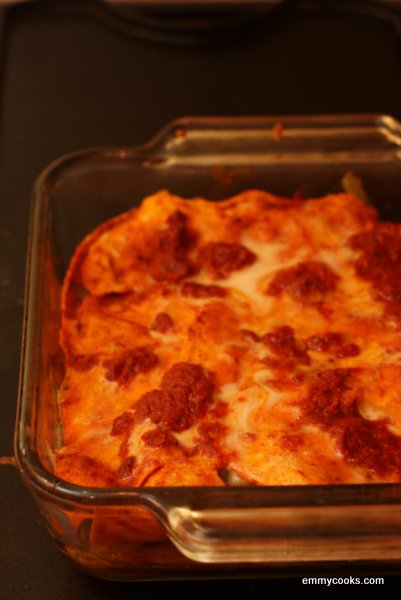 Layered Enchiladas with Potatoes, Onions, and Peppers: Prepare your enchilada sauce through the step of simmering it in oil on the stove, or empty a jar of prepared enchilada sauce into a pie plate and set aside.

Heat oil in a wide skillet over high heat and add a thinly-sliced onion, a couple of thinly-sliced peppers, and 3-4 potatoes diced into 1/4″ cubes.  Season well with salt.  Cook, scraping the bottom of the pan often, until the vegetables are softened and browned in spots.  Remove from heat.

Oil a 9×13 pan (or you can use two smaller pans, as I did, and save one for another day*), then dip 4 corn tortillas in the sauce and use them to line the pan.  Spoon half the vegetables on top of the tortillas, then sprinkle with a handful of grated jack or mild cheddar cheese.  Continue with another layer of dipped tortillas, another layer of vegetables, a little more cheese and a final layer of dipped tortillas.  Sprinkle a final handful of cheese on top and dollop any remaining sauce over the top of the enchiladas.  Cover the pan with foil (tenting it a little if necessary to avoid contact with the cheese) and bake at 350 until the cheese has melted and the sauce is bubbling around the edges, about 25 minutes.  Remove foil and turn on the broiler for a closely-watched minute or two to brown the top.

*Here’s how I freeze enchiladas: I line the pan with a long piece of tin foil and then make the enchiladas in the pan.  When I’m done, I fold up the overhanging edges of the foil to enclose the enchiladas.  I put the whole pan in the freezer until the enchiladas are frozen solid, then I remove the frozen wrapped enchilada-block from the pan and seal it in a freezer bag for storage.  When I’m ready to cook the enchiladas, I take them out of the freezer about 30 minutes in advance so that the edges thaw enough for me to peel off the tin foil, then I plop the unwrapped frozen enchilada-block back into the same pan I used in the first place.  I put the pan in the oven before turning it on so that it warms up slowly, and plan for a longer cooking time since I’m cooking the enchiladas from frozen.

16 thoughts on “Layered Enchiladas with Potatoes, Onions, and Peppers, Hopefully with a Fried Egg on Top”