I understand the impulse, believe me. It took me thirty-some years (ahem) to come around to the idea of trying a version of saag paneer, my favorite Indian food, with tofu instead of cheese. It just seemed wrong, too ascetic, the wrong place to skimp. Saag tofu sounded worse than no saag at all. (Kale saag paneer, on the other hand, is amazing.) 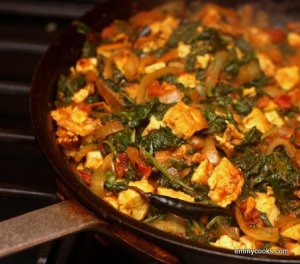 Of course, you already know how this story is going to end.

Because you know what? It’s great. The tofu has just the right texture and performs its sauce-soaking-upping duty perfectly. Whole spices irresistibly perfume and flavor the dish. And while you can certainly substitute paneer or add a splash of cream at the end for a more traditional saag, this vegan version was great in its own right.

On another note, I love Indian food but I’m a little wary of cooking it at home because I don’t have a tried and true recipe source (and it’s not a cuisine that I can cook improvisationally). Do you have a favorite Indian cookbook or recipe? Please share!

Saag Tofu (adapted from this Indian-Spiced Kale and Paneer): Heat 2-3 Tbs. oil in a heavy-bottomed pot over medium-high heat and stir in 2 bay leaves, 5 cardamom pods, 3 dried red chiles, a cinnamon stick, 4 cloves, and 1/2 tsp. whole cumin seeds. When spices are fragrant, stir in a finely diced onion and a tsp. salt and saute until onion is tender and browned. Now add a Tbsp. each grated ginger and garlic, a tsp. each ground cumin and ground coriander, and 1/2 tsp. each ground turmeric and ground red chile powder. Stir-fry for a minute or two, then add two diced roma tomatoes (or a cup of diced canned tomatoes) and let them cook down before adding a pound of washed and roughly chopped spinach. Let the spinach wilt and simmer, stirring occasionally. When the spinach is tender, stir in a block of cubed tofu. Simmer for another moment or two, then serve over basmati rice.

Next time I might try adding a little coconut milk at the end, would that be crazy?

12 thoughts on “Saag Tofu (or Paneer) with Whole Spices”